Street Angel Diaries — ” A Set of Compositions
of the Spirit” 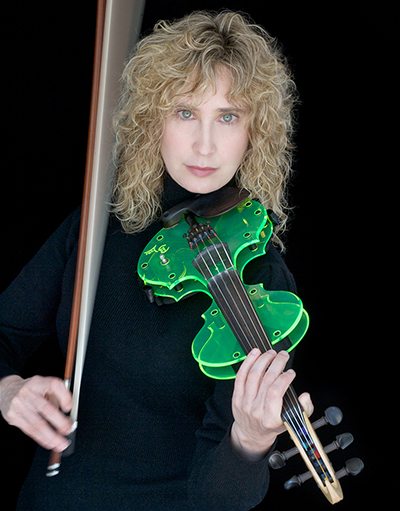 September Issue 2008
By Massimo Ricci
www.touchingextremes.org
This is a brief miscellany (25 minutes) of the music born from a multimedia performance about living rough – “Street Angel Diaries” – crafted by composer, poet and electric violinist Newmark, whose academic background is quite remarkable. Understandably, one gets a better overall impression of the effort by attending the show (video excerpts exist on YouTube and the label’s website), but what emerges from this taster is notable enough for an optimistic idea. On a purely superficial first listen, someone might have a propensity to think of “another Laurie Anderson”; this would be unjust. MLN’s compositional flair is rendered evident by a singular way of pulling together field recordings, Pro Tools-concocted sequences of erratic twists and turns – including ironic hints to techno and electronic time warps – and vocal elements (the texts derive from stories told by homeless people, the essential issues underlying this matter too many to sum up in a review: check www.streetangeldiaries.com to expand your ultimate interest). Newmark’s neon-lit violin is not necessarily a stable presence, which is just fine in this great scheme. Above all, she demonstrates – both through the writings and the sounds produced – to be a sensitive individual, an exceptional quality these days.

“A Musical Expression of Homelessness in America”

February 18, 2008
By Aloysius Ezeonyeka (Los Angeles, USA)It’s hard to find the right words to express the frightening ordeal of homelessness in America. Yet, in the “Street Angel Diaries” music, Mary Lou Newmark captures this disturbing reality. It is an exceptionally creative collection of music that challenges social indifference and awakens us to something about which we should all be concerned. The music is punctuated with a mantric repetition of the greatest frustration of homelessness: “I see no one and no one sees me.”

Newmark uses poetic expressions, electronic sound effects, human voices, and natural sounds to depict the despair, pain, confusion, and frustration of the homeless people. The Street Angel Diaries is not meant to comfort us or support our complacency, but to spur us on to action.

This audio CD could be used in family, school, and/or group settings to teach or draw people’s attention to the sad realities of homelessness in the most wealthy and powerful country in the world.

This website uses cookies to improve your experience while you navigate through the website. Out of these, the cookies that are categorized as necessary are stored on your browser as they are essential for the working of basic functionalities of the website. We also use third-party cookies that help us analyze and understand how you use this website. These cookies will be stored in your browser only with your consent. You also have the option to opt-out of these cookies. But opting out of some of these cookies may affect your browsing experience.
Necessary Always Enabled
Necessary cookies are absolutely essential for the website to function properly. These cookies ensure basic functionalities and security features of the website, anonymously.
Functional
Functional cookies help to perform certain functionalities like sharing the content of the website on social media platforms, collect feedbacks, and other third-party features.
Performance
Performance cookies are used to understand and analyze the key performance indexes of the website which helps in delivering a better user experience for the visitors.
Analytics
Analytical cookies are used to understand how visitors interact with the website. These cookies help provide information on metrics the number of visitors, bounce rate, traffic source, etc.
Advertisement
Advertisement cookies are used to provide visitors with relevant ads and marketing campaigns. These cookies track visitors across websites and collect information to provide customized ads.
Others
Other uncategorized cookies are those that are being analyzed and have not been classified into a category as yet.
SAVE & ACCEPT