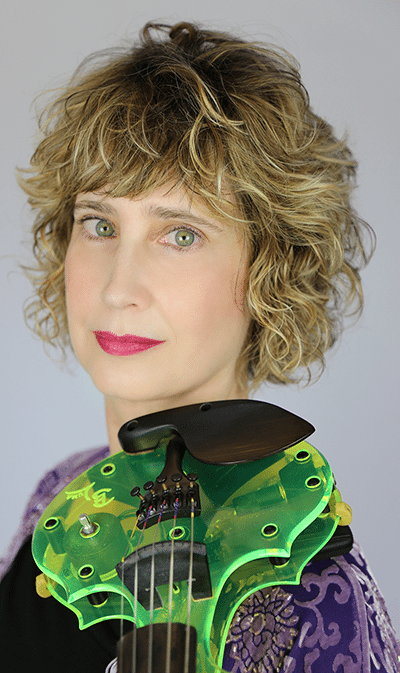 Mary Lou Newmark is an electric violinist, composer, and poet living in Los Angeles, California. Her compositions are far from traditional. Ms. Newmark bridges the gap between current trends in electronic music and the virtuosic violin techniques of the past. Her work incorporates live performance, original poetry and electronically processed sounds. The results are unique pieces that inhabit their own musical ecosystems. As an artist of both music and words, Ms. Newmark continues to expand her creativity to include works for theater that combine the performing arts to explore social issues.

Mary Lou is currently completing the recording process for her fourth CD, “A Stitch in Time” due to be released in the fall of 2022.  She is also in the beginning stages of launching her new creative business, “Sonic Storytelling Arts,” which had its’ first private event in February of 2022.  Since the beginning of the Covid-19 pandemic in 2020, Mary Lou has been retraining and rethinking her role as an artist in the current world of change and global challenges.  She has completed the Social Emotional Arts Certificate Program at UCLArts & Healing and the Sound Meditation Design course at Divasonic Music Academy.

In 2020, the first year of Covid-19, with all live performances cancelled, Mary Lou and textile artist Beanie Kaman began a new collaboration.

Using music she recorded at the TANK in Rangely, Colorado, Mary Lou weaved raw improvised pieces into new compositions– adding other sounds, reframing, and recontexualizing.  “Pigeons and the Hawk” is one such composition.  Beanie created visual layers of her work, and she constructed a sumptuous landscape, together with the music and video footage of Mary Lou at the TANK.  Steve Kaman (her brother and a well known film editor), blended all the images into the video. Watch the video here.

“Room to Breathe,” Mary Lou’s third CD, was released in Fall 2017. This album is a safari into the urban wilderness of Los Angeles, moving across genres to encounter coyotes, wild birds, a wolf woman, beats, and poetic verse.  “Room to Breathe” has enjoyed a robust life on college and public radio stations, with appearances on weekly Top 30 charts from Alaska to New York, including over 800 spins on WUOG. About “Room to Breathe,” Midwest Record wrote, “this engaging set delivers loads of sonic fulfillment. Killer stuff.”

Ms. Newmark was commissioned by the Los Angeles Alumni Chapter of Mu Phi Epsilon to write a work to celebrate the 100thAnniversary of the chapter.  Mary Lou premiered her composition, “Three Rivers” on February 24, 2019 at the Moss Theater in Los Angeles. See performance video here. Later that year Mary Lou was invited to perform “Three Rivers” at the Electroacoustic Barn Dance Festival at Jacksonville University in Florida.

In June 2010 the Culver City Chamber Orchestra (Arlette Cardenes, conductor) performed the West Coast premiere of “Canto de Luz – Song of Light, A Concerto for Electric Violin and Orchestra,” with Ms. Newmark as soloist. This performance featured Mary Lou’s fully revised score and the addition of a new cadenza. Originally commissioned by the Montpelier Chamber Orchestra in 2003, “Canto de Luz” remains one of a handful of concertos for electric violin and orchestra ever written. The original premiered in March of that year to a standing room only audience in Montpelier Vermont with the composer as soloist.

In March 2011, clarinetist Andrea Cheeseman premiered a new Newmark composition, “Shattered, for Clarinet and Soundscape,” at Appalachian State University. Subsequently, Ms. Cheeseman performed the work in the South Haven Concert Series in Michigan and at the 2014 Electro-Acoustic Barn Dance at the University of Mary Washington. In December 2011, Mary Lou’s “Seven Sacred Stones” were performed as part of “Overlay,” a new dance work created through the international collaboration of the Los Angeles Pennington Dance Group and Yorke Dance Project of London. “Overlay” toured London in March 2013, and has been performed many times since throughout Southern California.

Mary Lou’s composition, “I dreamt of birds,” was selected for inclusion in the 60X60 Athena Mix (2012) and the first 60X60 Environmental Mix (2012). Each mix contains sixty compositions by sixty composers. Begun 10 years ago by Robert Voisey of Vox Novus, the 60X60 Project has become one of the most engaging programs of new music around the world. The 2012 Athena and Environmental Mixes have been presented at the Harris Museum and Art Gallery in Lancashire, England, The University of Hartford, Connecticut and Soka University, California.

Ms. Newmark is well known as a dynamic performer of her own compositions. Among her concert appearances are performances at Brandeis University, Northern Arizona University, UC Riverside and Palomar College.  Her works have been performed at international festivals in Corfu, Greece and Montreal, Canada, and have been featured on radio stations throughout the United States, in Canada, and around the world.

In spring 2022, Mary Lou taught a workshop at Beyond Baroque Literary Arts Center on “Poetry Performance.”  This was the first workshop at this legendary venue to focus on how to effectively and confidently perform original poetry of all styles.

Mary Lou’s poems are most often experienced aurally as part of her music compositions and theater works.  In 2018 Mary Lou began a collaboration with poet Brendan Constantine to create “Trading Storms,” a unique blend of original music and poetry on stage.  Their performances in the Los Angeles area created a new hybrid form, which achieves a dialogue between music and poetic systems. The poems and music spar, animate, highlight and intensify each other. Mary Lou and Brendan have created several new works together, including “Sonata in B Minor for Poet and Electric Violin,” and “Horses of Grace.”

She has also collaborated with other musicians as a lyricist and spoken word artist. In 2011 she collaborated with Macedonian musician, Vasko Serafimov on “City Against Time,” combining her poem and vocal performance with his evocative electronic music. In 2009 her poem, “Scattered,” was paired with John Legend’s “Ordinary People” in the anthology, “Poetry over Music: Volume 4, Freedom Through Music.” Her composition for storyteller and electronic soundscape, “La Loba, Wolf Woman,” was performed at Rutgers University’s Steadman Art Gallery as part of the art exhibit, “A Complex Weave: Women and Identity in Contemporary Art” (2009). With vocal composer Valerie Crescenz she collaborated on “Those Red Shoes,” which was premiered by the Princeton Singers at the Lehigh University Choral Composer’s Forum in 2008.

“Breathing Room,” Mary Lou’s hybrid theater work, premiered in a full theatrical production at the Greenway Court Theatre (Los Angeles) in October 2015. “Breathing Room” follows two neighbors in a Los Angeles suburb – Marilyn, an artist, and the Professor, a high school science teacher. With evocactive music performed live on stage by Mary Lou, the two neighbors struggle with modern technologic vertigo, while living with hummingbirds, meatball eating bears, coyotes, and backyard chickens. Structured like a symphony, this play within a concert is a convergence of music, science, theater, poetry and spirituality. In his selection for the Best of Los Angeles Theater 2015, Ernest Kearney wrote, “And audiences were dazzled by ‘Breathing Room’ with Eileen T’Kaye and Charles Reese in Mary Lou Newmark’s disarmingly beautiful musical parable.”

“Breath of Trees” premiered in two workshop performances in November 2011 at ARC Pasadena. Directed by Doug Tompos, “Breath of Trees” weaves live music, poetry, storytelling, humor, science, and dance into a tapestry that explores the relationship between modern man and nature. Mary Lou as writer/composer joined the cast on stage, performing on electric violin, percussion and sound design.

“Street Angel Diaries,” Ms. Newmark’s multimedia work about the homeless, looks at homelessness from the perspective of the lives of homeless people themselves. Directed by Darin Anthony, “Street Angel Diaries” premiered in a full theatrical production on the Boston Court Main Stage in Pasadena, California in December 2006. Philip Brandes of the Los Angeles Times hailed the work’s “haunting score.” Brandes went on to applaud Mary Lou’s “modernistic musical sketches on her neon-lit electric violin — picture Laurie Anderson on a good hair day, but aiming more at emotions than intellect.”

In the fall of 2020, with a generous grant from Mu Phi Epsilon, the Mary Alice Cox Award, Mary Lou completed the Social Emotional Arts Certificate Program at UCLArts & Healing.

At the 2017 Mu Phi Epsilon International Convention in Denver, Colorado, Mary Lou was awarded the Elizabeth Mathias Award.  This award is given once every three years to a member “in honor of their outstanding and unique achievement in the field of music and music service.”  It is one of the highest honors given by this professional music fraternity.

In March 2015, Mary Lou was selected to attend the “Extended Now” Workshop with Ian Winters at the Djerassi Resident Artist Program in Woodside, California. She worked with artists, filmmakers and composers from across the United States, culminating in a performance of her new composition, “Bosque Birds.”

Ms. Newmark’s numerous awards for composition and performance include the Bettylou Scandling Hubin Award in Music Technology (2009), election into the prestigious “Artists, Composers, Musicologists, Educators” (ACME) of Mu Phi Epsilon (2007), and nomination for the Herb Alpert Foundation’s Alpert Award in the Arts for Music (2004).

She received a Subito Grant from the Los Angeles Chapter of the American Composers Forum (2003), worked with composer Steve Mackey and the Talujon Percussion Quartet during a residency at the Atlantic Center for the Arts in Florida (2002), and has been awarded annual ASCAP Awards (1999-present), multiple Mu Phi Epsilon Professional Grants, and recognition in the Luigi Russolo Competition for electronic music (1998).

Ms. Newmark has been an instrumental music teacher in private and public schools throughout Los Angeles from elementary to college levels. She maintains a private violin and composition studio. She frequently presents lecture/demonstrations of her music and compositional methods throughout the United States.

This website uses cookies to improve your experience while you navigate through the website. Out of these, the cookies that are categorized as necessary are stored on your browser as they are essential for the working of basic functionalities of the website. We also use third-party cookies that help us analyze and understand how you use this website. These cookies will be stored in your browser only with your consent. You also have the option to opt-out of these cookies. But opting out of some of these cookies may affect your browsing experience.
Necessary Always Enabled
Necessary cookies are absolutely essential for the website to function properly. These cookies ensure basic functionalities and security features of the website, anonymously.
Functional
Functional cookies help to perform certain functionalities like sharing the content of the website on social media platforms, collect feedbacks, and other third-party features.
Performance
Performance cookies are used to understand and analyze the key performance indexes of the website which helps in delivering a better user experience for the visitors.
Analytics
Analytical cookies are used to understand how visitors interact with the website. These cookies help provide information on metrics the number of visitors, bounce rate, traffic source, etc.
Advertisement
Advertisement cookies are used to provide visitors with relevant ads and marketing campaigns. These cookies track visitors across websites and collect information to provide customized ads.
Others
Other uncategorized cookies are those that are being analyzed and have not been classified into a category as yet.
SAVE & ACCEPT